🌸 This post has bloomed and is unlikely to change.

I always had a hard time understanding recursive functions when I stumbled upon them while learning to code. While I’ve got a better understanding today I don’t use them much since they most often make the code harder to read and reason about. One place I do use recursion however is when implementing recursive components.

In this post we’ll touch on what recursion is, why recursive components are pretty cool for solving certain kind of problems and implement one that renders a folder structure like this:

While we will use React to implement this component it’s possible to build recursive components in all other modern JS frameworks too.

Before we get started, let’s talk just a little bit about recursion. Feel free to skip ahead if you got a good grasp on it already.

But what is recursion really? Wikipedia defines it as “a method of solving a problem where the solution depends on solutions to smaller instances of the same problem.”. In reality, this often translates to problems where hierarchical structures like trees are involved. 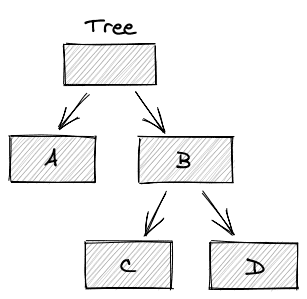 So a recursive function is a function that invokes itself. In the case of traversing the above tree, we would have a function traverse(node) that we’d invoke for the root of the tree, and then it would invoke itself for every child. So first traverse(A), then traverse(B) and then those would invoke the function on their children and so on.

A recursive component, on the other hand, is a component that renders itself. One place where this comes in handy is when implementing features that deal with tree-like data, for example, a nested menu, comments with a hierarchy or as we’ll implement in this post; a component that displays a folder structure.

The only important part of recursion we need to keep track of in our implementation of a recursive component is the base case. This is the case when we need to break out of the recursion and stop rendering ourself, otherwise we’d be stuck in an infinite loop. We’ll get back to this is just a second.

Let’s get to building the component. The data for the folder structure looks like this:

We’ll start by creating a new component called Folder that will take a single prop called folder. It will render the name of the folder and then render itself (ie the same component) for each of its children.

The one thing missing from this is that we need to identify our base case so that we can break out of the recursion. In our case, this will be when the folder has no children, or in other words, when it’s a leaf in our tree. Let’s add a conditional that checks just this.

And that’s it! You’ve just created a component that recursively renders itself until it reaches its base case. If you’d like you can now add some better styling, expand/collapse buttons or try implementing it a recursive comment structure. You can find the complete source to the example at the top in this CodeSandbox.